On Friday my husband and I ended up with a behind the scenes tour of the nocturnal house at Taronga Park Zoo in Sydney. I had won it as a prize in a competition. I nearly didn't enter because we're those sort of people who never win competitions. But as it didn't cost me anything I decided I may as well. Imagine my surprise to find out I was one of five winners!
So on Friday morning we left early and drove to Sydney, where we checked into the motel that had been booked for us. After meeting up with the other winners we were all driven to the zoo.
The weather could have been kinder. Lately it seems to do nothing but rain in Australia but even that could not dampen spirits. First, we were taken to the kitchen and saw where food for the nocturnal animals was prepared and we patted some very tiny feather tail gliders, small enough to fit in the palm of your hand. After that we went through to where the bilbies came for their run.The zoo has created a desert like area for them since this is their natural habitat. Two bilbies came running out among us, darting this way and that, but not a bit frightened by the people watching who, of course, wanted to pat them. They are incredibly soft and very cute with their long rabbit like ears and pointy snouts.
We were later introduced to ring tail possums which were quite happy to run up your arms and curl around your neck. Not everyone was happy with this idea but most people were. Since I love owls, as anyone can tell from my website, www.daleharcombe.com I loved meeting two tawny frogmouth owls and a rufus owl. The rufus owl is large and majestic looking. I even had the opportunity to get up close and personal with two echidnas. They are definitely not as soft to pat as bilbies, but feel the way they look - spiky, like patting a cushion of quills.
It was great to be able to go behind the scenes before being left to spend the rest of the afternoon at the zoo.
This week I have also had a blog tour happening on my blog http://www.livejournal.com/users/orangedale/ for a fellow Aussie author who has a new picture book out this week. It was great to go behind the scenes with her as she talked about where the idea for the book and the characters came from.
I admit I'm a person who always likes to know about the author and how they work. That's why it is so important too that as writers, readers and as Christians we are reading God's Word regularly, because it is like a behind the scenes - up close and personal look at God. As we read, we learn more about God and the way He works in the Old and New Testament, but also in our lives. We learn about His character and what he expects of us. What a shame that too often we consider ourselves too busy with other things to spend that time behind the scenes, reading God's Word, talking with Him and getting up close and personal with Him. Surely each of us should make that a priority in our lives. 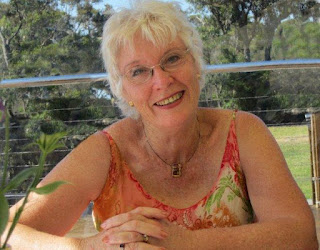 Dale's latest novel Streets on a Map was published by Ark House Press in December 2010. She is currently working on another novel manuscript and a non fiction project. Dale has also had seven childen's books and Kaleidoscope a collection of her poems published. You can buy her books or find out more about Dale from her website www.daleharcombe.com or her blog http://www.livejournal.com/users/orangedale
Posted by Dale